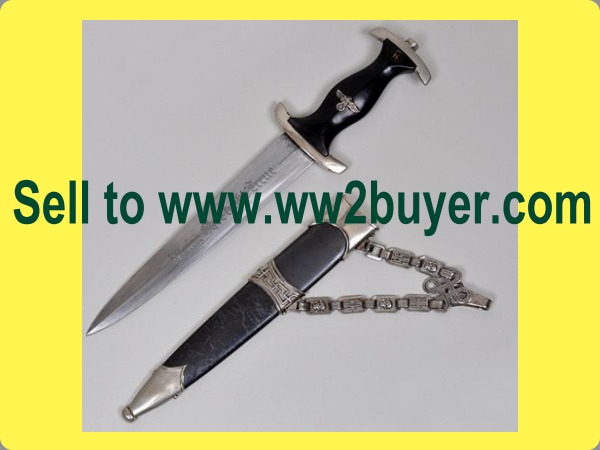 Financial Reward is Waiting In
Exchange For Historic WW2 Memorabilia.


This is the pioneering specialist
website tasked with acquiring and thus
preserving WW2 Memorabilia.
We buy historical items
of every description ,
from all countries around the
world We provide free valuations
and identification for any
number of pre 1946 Militaria

If you’re simply curious how much
your WWII items are worth yet you are
not ready to sell We provide free appraisals.
No commitment on your part is
expected we are conscious of those
within the industry pressurise those
who contact them. Our believe
is simply this. If we provide the most
winning offers/valuations
we will get our fare share of business ..
Emails are responded to quickly and professionally.
Many emails will be responded to within one hour.
Please make sure when emailing,
that you take clear pictures of the WWII item.
A brief history of where it came from
would be nice, but usually not necessary.
Shipping and Payment Information
NEVER SEND GOODS WITHOUT
PRIOR PAYMENT EVEN TO CANADA !
Be smart, be safe on internet transactions.
Google my name / website
to see that I am legit with only positive
transactions. References upon Request.

Payment can be made in advance
though: PayPal (recommended),
Or Money Order, Cashiers Check
or Western Union for goods received .

We make the selling process of your
WW2 memorabilia fast and easy.
David Mattey of WW2 Buyer has turned his
lifelong love of Militaria into a career .
David Says he is comforted to know that he plays a
part in locating and preserving
historic items for generations to come.

Top Prices paid in advance
(Paypal)lmets, caps, visors, flags,
field gear, equipment, medals, insignia, uniforms, knives, guns,
paper work, trench art, photo albums, battle souvenirs, relics or
veteran’s bring backs. Every nations WW2 memorabilia is required
by the industry’s most conscientious buyer, including, but not limited
to: US, German, Japanese, Russian, and Italian militaria. Individual
pieces and large lots welcomed. Sell WWII German helmets here.
for your World War 2 Militaria, to Include heccccc The memory of service
provided by your family member is of great importance to us .
Details of the late owners will be rewarded by additional payments.
All WWII items happily accepted for a free appraisal

If you are simply curious as to what your World War Two item is worth,
WW2buyer.com are happy to take a look at images received and provide
you the correct market valuation . We appreciate all messages
received regardless of weather you are ready to sell or a simply curious..

Do not be taken in by advertisers who claim to be collectors or teaches
this type of website is very expensive to run and to maintain it’s position.
Think carefully before taking the first offer gain
several opinions then you will now who to deal with and who to forget.
Edit this page


Trade In German Badges
Of The Third Reich
Has Been Forced
Underground.
Why Sell To German Badges Wanted ?
All historical artifacts acquired by
German Badges Wanted.com are for
the consumption of mature collectors,
Museums, And educational facilities.
A New Generation
Of The Politically Correct
Find It Offensive For
Genuine Army,Navy ,
And Airforce Badges To
Be Offered For Sale .

German Badges Wanted.Com
Respect The Sensitivity Of
Exposing People To Swatikas
Against Their Will.
We Would Like Take
this Oppotunity To
Entirely Distance
Ourselves From
Those Who Support
The Evil Ideology Of
Facist Political Groups
Past And Present.

Our Customers Include
Museums,
Advanced Collectors,And
Ethical Investment Groups.
Artefacts From History
Should Be Preserved In .
An Un Edited Form.
German Badges Are
Extreamly Valuable.
By Selling Directly
To Dedicated.
Proffesionals
.david@germandaggerbuyers.com

Free Up To The Moment
Offers/Valuations
Nazi Badge Prices?
From The
Longest Established
Militaria Buyers On Line.


We Need Your Business!

We Cannot Afford To Fail You!
We are always
happy to help you with

We make sure that
War veterans,
their widows and families
get the

correct deal
they deserve when selling
to us at
German badges wanted.com.

An Englishman owns the largest
collection of Nazi artifacts
As the crimes of the Nazi regime retreat
further into the past, there seems to be
an increasing desperation in the race to get
hold of mementos of the darkest chapter
of the 20th century.

In the market for Nazi
memorabilia, two out of the three principal
ideologies of the era
— fascism and capitalism —
collide, with the mere financial
value of these objects used to
justify their acquisition, the spiralling
prices trapping collectors in a frantic
race for the rare !.

An Englishman
owns the largest collection
of Third Reich Militaria

When he was 5 years old, He received an
unusual birthday present from his parents:
a bullet-Damaged Waffen  SS  helmet,
A lightning bolt transfer on It’s side.
It was a special request.


The next year, at a car auction in Monte Carlo,
he asked his multimillionaire father for
a Mercedes: the G4 that Hitler rode into
the Sudetenland in 1938.
Father refused to buy it and his son
cried all the way home.

At 15, he spent birthday money from
his grandmother on three WWII Jeeps
recovered from the Shetlands,
which he restored himself and sold
for a tidy profit.


He invested the
proceeds in four more vehicles,
together with his very first  tank.

The Englishman begged  his father
to buy him Hitler’s Mercedies  when
he was just six-years-old, and cried
when his father refused. He now owns it.

After leaving school at 16, he went
to work for an engineering firm, and
then for his father’s construction company.
He spent his spare time touring
wind-blasted battle sites in Europe
and North Africa, searching for tank parts
and recovering military vehicles that
he would ship home to restore.

The ruling passion of his life,
though, is what he calls the
— widely regarded as the world’s
largest accumulation of German military
vehicles and Nazi memorabilia.
The collection has largely been
kept in private,
under heavy guard, in a warren of
industrial buildings. There is no
official record of the value of His
collection, but some estimates place
it at over $160 million.

Since that initial SS helmet,
His life has been shaped by his
obsession for German military memorabilia.
He has traveled the world tracking down
items to add to his collection,
flying into remote airfields, following
up unlikely leads, throwing himself into
hair-raising adventures in the pursuit
of historic objects.

He readily admits that his urge to accumulate
has been monomaniacal,
Often elbowing out a regular social and family life.
The French theorist Jean Baudrillard once
noted that collecting mania is found
most often in “pre-pubescent boys and
males over the age of 40”; the things we hoard,
he wrote, tend to reveal deeper truths.

Despite the trade of Nazi antiquities being
banned or strictly regulated in many countries,
the market’s annual global turnover is
expected to be in excess of $47 million.
A signed copy of Mein Kampf goes for around
$31,000.


His Father  came back with a wife, who he had
first seen from the turret of a tank as he pulled
into her village in  Germany.
Father made hundreds of millions in the post-war
building boom, then spent the rest of his
life indulging his zeal for motor cars.
Our Englishman speaks of his late father as
“not just my dad, but also my best friend Despite
being one of seven children,he was the sole
beneficiary of his father’s will. He no longer
speaks to his siblings.

It is hard to say how much the echoes of
atrocity that resonate from Nazi artifacts
compel the enthusiasts who haggle for and
hawk them. The trade in Third Reich antiquities
is either banned or strictly regulated in Germany,
France, Austria, Israel and Hungary.

Still, the business flourishes, with burgeoning
online sales and increasing interest from
buyers in Russia, America and the Middle East;
The Englishmans biggest rival is a mysterious,
unnamed Russian buyer.

There is also a roaring trade in the
automobiles of the Third Reich — in 2009,
one of Hitler’s Mercedes sold for almost
$7.8 million. A signed copy of Mein Kampf
will set you back $31,000, while in 2011 an
unnamed investor purchased Joseph Mengele’s
South American journals for $473,000.


As the crimes of the Nazi regime
retreat further into the past, there
seems to be an increasing desperation
in the race to get hold of mementos of the
darkest chapter of the 20th century.
In the market for Nazi memorabilia, two out
of the three principal ideologies of the era
— fascism and capitalism — collide,
with the mere financial value of these
objects used to justify their acquisition,
the spiralling prices trapping collectors
in a frantic race for the rare and the covetable.

He kept making these tentative
passes at the stigma attached to
his obsession, as if at once baffled by
those who might find his collection
distasteful, and desperately
keen to defend himself, and it.
The lower level of the building
contained a now-familiar range
of tanks and cars, including the
Mercedes G4 our collector saw as
a child in Monaco. “I cried and
cried because my dad wouldn’t buy
me this car. Now, almost 50 years later,
I’ve finally got it.”
On the walls huge iron swastikas hung,
street-signs for Adolf Hitler Strasse
and Adolf Hitler Platz, posters of Hitler
with “Ein Volk, Ein Reich, Ein Führer”
written beneath.
“That’s from Wagner’s family home,”
he told me, pointing to a massive
iron eagle spreading its wings
over a swastika. It was studded
with bullet holes. “I was in a scrap yard
in Germany when a feller came
in who’d been clearing out the
Wagner estate and had come upon
this. Bought it straight from him.”
We climbed a narrow flight of stairs
to an airy upper level, and I felt that
I had moved deeper into the labyrinth
of Wheatcroft’s obsession.
In the long, gabled hall were dozens
of mannequins, all in Nazi uniform.
Some were dressed as Hitler Youth,
some as SS officers, others as
Wehrmacht soldiers.
It was bubble still, the mannequins
perched as if frozen in flight, a sleeping
Nazi Caerleon. One wall was taken up
with machine guns, rifles and rocket
launchers in serried rows.
The walls were plastered with
sketches by Hitler, Albert Speer
and some rather good nudes
by Göring’s chauffeur.
On cluttered display tables sat a
scale model of Hitler’s mountain
eyrie the Kehlsteinhaus, a twisted
machine gun from Hess’s crashed plane,
the commandant’s phone from
Buchenwald, hundreds of helmets,
mortars and shells, wirelesses,
Enigma machines, and searchlights,
all jostling for attention. Rail after
rail of uniforms marched into the distance.
“I brought David Ayer in here when
he was researching Fury,” He told me.
“He offered to buy the whole lot there and then.
When I said no he offered me
30 grand for this.” He showed me
a fairly ordinary-looking camouflage tunic.
“He knows his stuff.”
“I try not to answer when
people accuse me of being a Nazi,
I tend to turn my back and leave
them looking silly. I think Hitler and
Göring were such fascinating
characters in so many ways.
Hitler’s eye for quality was just extraordinary.”
We were standing in front of
signed photographs of Hitler and Göring.
“I think I could give up everything else,
” he said, “the cars, the tanks, the guns,
as long as I could still have Adolf
and Hermann. They’re my real love.”
I asked Our Engineer whether he was
worried about what people might read
into his fascination with Nazism.
Other notable collectors, I pointed out,
were the bankrupt and discredited
David Irving and Lemmy from Motörhead.
“I try not to answer when people
accuse me of being a Nazi,”
he said. “I tend to turn my back
and leave them looking silly.
I think Hitler an